Roving Data Buoys as big as islands  will sail autonomously through
troubled oceans, driven by new sail technology, powered by  natural
forces, cleaning and revitalizing ocean dead zones and creating  habitat
that nurtures sea life while communicating data back to land via satellite
on the state of our seas.

And I want to build the first one... 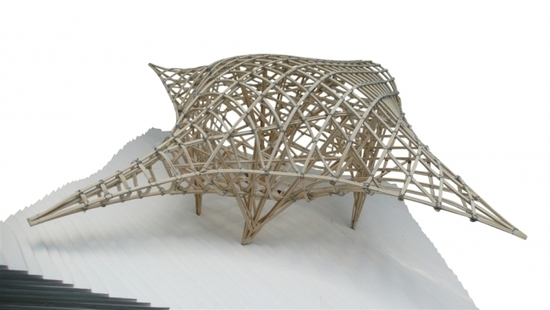 Goal;
To create a 5 year program That will result in an
Inhabitable, Floating Science Island capable of navigating
to Oceanic Dead zones, revitalizing them, and removing harmful plastics from Oceanic Gyres.
What Will The Island Look Like?It will Look Like a Giant Manta Ray. A true Island of approximately an Acre of surface area, including vegetation,
habitation pods, and a central navigation pod featuring computerized Kite
Sail and rudder control. A Tail of smaller islets will be drawn around to
create a central 'Lagoon".  The Island can be accompanied by
an existing oceanographic research vessel capable of maneuvering by towing and
delivering supplies and personnel.
This Model by 24H Architecture gives an inspiring impression of what the islands inner structure could be like.
What Will The Big Voyage be Like?The Caribbean Voyage is intended to
start in the Windward Caribbean and
sail along the island chain, providing
regular opportunities for exchange
of personnel and interaction with local
cultures, educational, media, and
scientific projects. 4 months in length
beginning in December, the voyage
will end in Miami  Florida.

Tethered flying Kite Sails operate at altitudes of between 100 and 300 meters
above the ship and provide 5 to 25 times more power than traditional sails,
while operating at the push of a button from an automatic control system.
The towing kite is made from high strength and weather proof textiles and
transmits the tractive force to the vessel via a synthetic rope. it
provides its own energy supply to the control pod by means of a special
cable integrated into the Towing rope. SkySails are
manufactured by
Zeppelin and have been used on cargo ships since 2006 to reduce
fuel
consumption by more than 20%.
In your drawing, what are the vertical "posts" beneath the  island?In order to navigate or maintain a relative position the island will need lateral resistance to pair with the Skysails so as not to simply drift down wind. Think of them as Daggerboards to help 'Steer" the island.

What will the first years project be?
The First year project will include all 5 components of
the Grand Voyage, but on a model scale.
What are the cables dangling down beneath the island?Those are fiber optic sensors developed by Dr Eddie Widder and her group Ocean Research & Conservation Association
What other Floating Island projects existIf you search around on the subject you can come across any number of creative visions for Floating Islands. A while back Artist Daniel Oliva alerted me to the Open Sailing project of Cesar Herada. It has so many similar features to the goals of the Floating Island Project that the only logical choice is to try to work together for great success. Please check out the video below;

Design Elements Contributed by Engineer David Zinni
Food for thought: Although I haven't viewed any details of your drawing, it
seems that something this size would require more than just the brm (bio
remediation matl) to hold it together, and perhaps something  to provide
additional buoyancy. Also, I would think that certain areas would require "solid
ground" such as lightweight reinforced concrete to provide any necessary bases
foryb buildings (even if they're small bldgs), roadways, walkways, and
especially for anchorages of equipment, machinery, moorings of the island
itself, anchorage points for external vessels such as large bits, bollards and
cleats, and perhaps in certain perimeter areas for a "wharf" or docking area.
These structural bases could be surrounded by the brm, and or they could have
brm beneath them in some sort of matrix or cell structure within the concrete
(in order to maintain continuity of the full biological filtration effects so
important here). These concrete areas would also require additional flotation
devices beyond just the flotation provided by the brm matrix itself. What I'm
getting at is that you need some serious structural design and some serious
buoyancy analysis for something of this size. This is not just a small floating
bio island like the ones I've seen in the manf photos. I'm trying to say that
ultimately youll need a naval architect, perhaps one who might work on a pro
bono basis.... As a civil and structural engineer, I know a little about
concrete, steel and wood timber construction. You will also need some mechanical
engineering design to go along with the naval architecture design. A marine
engineering designer would be appropriate for this. ...
This is especially critical for the propulsion system; being wind powered it
will again require some brainstorming and serious engineering design by a team.
This team may also include people who manufacture and use kitesails for
instance. And there will undoubtedly be some "topsoil" and/ or sandy soil
involved in this island if it is going to include any terrestrial plants. Even
with marine plants such as mangroves at the edges, you need a good matrix of
sand and some organic biomass for them to grow in. Given all of these different
and somewhat incongruent features, the island needs both an overall structural
matrix to hold it together, and then some strategically place structural
components in certain areas as I mentioned above.  I'm somewhat familiar also
with bio load, nitrogen cycle, bio waste processes, etc because this is also
part of civil and environmental engineering. I noticed you mentioned microbes or
bacteria that process nitrites into ammonia and or nitrate. You will require
both aerobic and anaerobic bacteria, and the plants growing on the island will
utilize the nitrate to thrive. You clearly want the island to provide a means of
biologically filtering the water around and beneath it. So all of these things
must be calculated by scientists. You have the right group for this part at nova
southeastern. I've met some of them. I'm somewhat familiar with biological
filtration systems  Lastly, I realize that your plan involves a
scaled-down "model" version of the island initially. But all of these ideas and
issues can be incorporated into the model with the right support (design)
-people and funding.
What about a "Fresh Water Lens" Dave Zinni comments:
Freshwater lens will not work unless it has a man made containment  vessel to
separate it from the seawater. Perhaps the brm manf  (manufacturer) or floating
island company already have developed a way  to do this. But I haven't had a
chance to look hard at their imformation yet.  The lens containment vessel could
perhaps be made of a biological matl, even though it is man made. And the
containment vessel could of  course be fully concealed -- that is, it'd be
surrounded by soil, brm,  soil, plants, etc. I would think you'd want a
freshwater lens to connect an exposed freshwater lake or pond(s) as well.
Consider these related   tecnologiees: 1) the pond segment of the aquarium
industry (many many  products and companies to consider); 2) a company called "
Bio Walls"  that designs and produces living wall matrix materials (I believe
theytr located in nj). Consider also that thete are companies that specialize
in living roofs for buildings. That is, roofs that are covered with soil and
plants, as part of the "green building movement". All of these  things exist
already, even if they are to date only being used in  "terrestrial applications
". All of the companies that design and make  these products should be willing
to assist you in your endeavor for  little or no cost (design hours and
marerials provided at little or zero cost to your project.